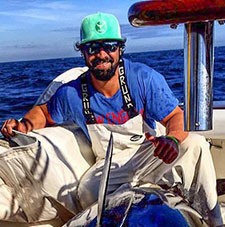 Matty's fishing affliction began at the age of 4, Fisher Price reel in hand on the salt ponds of RI. He was surrounded by fishermen from day one, and spent most of every summer chasing fish from his family's boat, Tuf Guy, fishing alongside his brother and dad.

Matt, like captain Damon, also attended Hobart College where he secured a history major and played 4 years of Division 1 lacrosse. After graduating in 2009, Matt went on to play lacrosse professionally for the Boston Cannons for 5 years. On the days he was not traveling or on the field, Matt was working on the pursuit of fish.

In 2010, Matt became the sales manager for Gibbs Lures, focusing his efforts on refurbishing the company's image in both the inshore and offshore fishing community. In 2013, Matt joined the Castafari team, and has since become an integral part of the boat's offshore accomplishments. He has been onboard for several tournament wins and notable catches, including a 405 pound swordfish caught on the troll in 2016!

In 2014 Matt became a part owner of Deep Ocean Apparel where his focus remains in sales management and social media. It is here where he can blend his on the water exploits and passion with his company...lucky guy! The Castafari team is proud to be working with Deep Ocean Apparel.