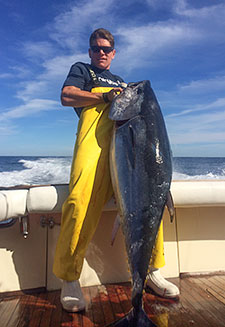 Captain Billy is one of Team Castafari's finest, and has been fishing in the Castafari cockpit for 4 consecutive seasons. His offshore fishing abilities are world class, and he has been a very valuable addition to the Castafari line-up. Billy cut his teeth in the sportfishing industry working at Falmouth Bait And Tackle and Bad Fish Outfitters. He has several tournament wins under his belt including 2 first place finishes in the Nantucket Big Game Battle (on his own boat!). The Castafari also claimed a 1st Place win at the 2015 Tri-State with Billy in the cockpit.

Billy started offshore fishing at the age of 10, and is on the water chasing fish whenever humanly possible. He graduated Mass Maritime Academy in 2013, and continued his career on the water working full time during the winter months as a Third Mate on an oil tanker in the Gulf Of Mexico. He currently holds a 1600 Ton Master USCG license/ 2nd Mate Unlimited Tonnage license. Billy has fished the waters of New England, Florida, Louisiana, Texas, St. Thomas BVI's, and Costa Rica. He is a proven master in the bait-rigging department, and will be sharing his knowledge and craftsmanship with all who participate in the bait-rigging workshops.